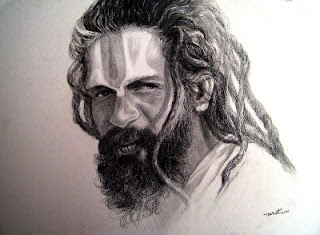 In Hinduism, "sadhu" is a common term for a mystic,an ascetic, a Yogi,or wandering monks.The Sanskrit term sādhu ("good man") refers to renounce rs who have chosen to live a life apart from or on the edges of society in order to focus on their own spiritual practice.Usually they live by themselves, on the fringes of society, and spend their days in devotion to their chosen deity.
Some perform magical rituals to make contact with the gods, others practise intense forms of yoga and meditation to increase their spiritual powers and acquire mystical knowledge.Certainly, not all sadhus are enlightened. But believers regard them all as holy anyway, if only because of their radical commitment.

This sketch is based on a wonderful photo of such sadhu taken by my husband on the banks of the Ganga river, Rishikesh.I liked the intense expression on this sadhu's face.His eyes were intelligent, the half smile intriguing,the hair matted-- woven into 'dreadlocks'or "jata",as we call them in Hindi.
I have done nothing more than express it in my own way, what was already there.
You can have a look at the original man here, at my husband's photoblog
16"X12" , graphic pencil on paper
Posted by Arti at 12:38 AM

Arti
I am a self-taught artist.This blog has helped me to showcase my work and find a lot of friends who are a constant source of encouragement and inspiration.I thank you for visiting me and taking time to look at my art.