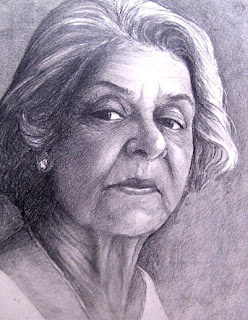 Maharani Gayatri Devi of Jaipur, who died last Wednesday at the age of 90. She was once included in Vogue magazine's Ten Most Beautiful Women . Very few people can look so stunningly beautiful even in their old age.One of the last remaining symbols of India's feudal past, Ms. Devi and her husband, the Maharajah of Jaipur, ruled over a fief of some two million peasants" before independence. She also participated in India's burgeoning democracy, being elected to parliament three times and serving from 1962 until 1975.
A tribute ....
Posted by Arti at 1:19 AM

Arti
I am a self-taught artist.This blog has helped me to showcase my work and find a lot of friends who are a constant source of encouragement and inspiration.I thank you for visiting me and taking time to look at my art.